How to Capture Natural Smiles for the Camera | Mom365 Blog

How to Capture Natural Smiles for the Camera 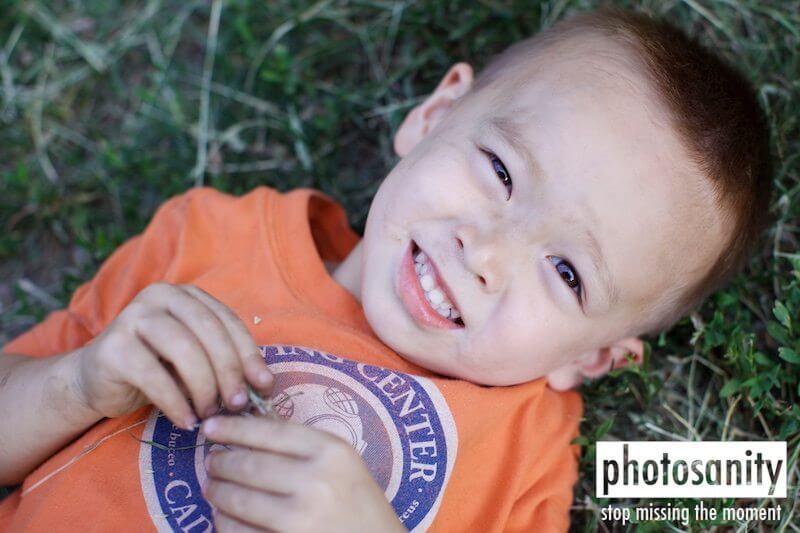 While I wouldn’t say that I have a photographic memory, I have a very strong visual memory. When I look at a photo, I can usually remember the moment and the context, even if the photo itself doesn’t offer many clues. The photo brings me back to the moment, which is one of the reasons why I don’t like to ask my kids to smile for the camera.Â  ThatÂ doesn’t create a moment Â I want to remember; in fact, it does the opposite.

One downside to this is that my kids have absolutely no idea how to smile nicely for the camera. This is most obvious in group photos with other kids. Everyone is smiling and looking at the camera except my kid who is either grimacing or distracted and looking elsewhere!

I wouldn’t have it any other way, though. My memories are more important than a smiling photo, and the smiling photos I have are all the more treasured for being natural.

Here are my favorite non-posed smiling photos from over the years with my kids, arranged roughly by age. In no instance were they asked to smile for the camera… they are all natural smiles! 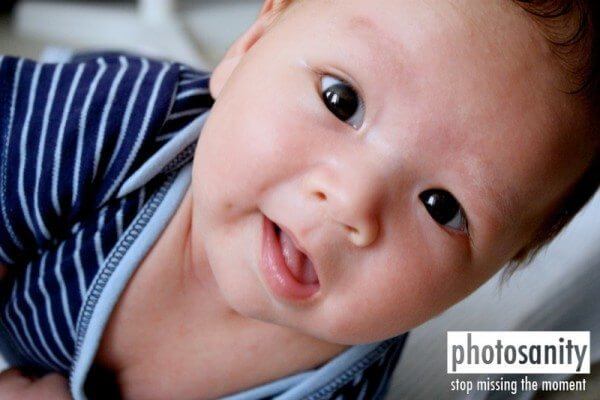 Classic Liam at around three or four months! Of course at this age there is no such thing as a posed smile. Â You can wait for a smile, or coax one out through clucking, playing peekaboo and generally making a fool of yourself by making silly noises. In the case of this photo, this sideways little grin was the natural result of some tummy time efforts and a fortuitous good mood. 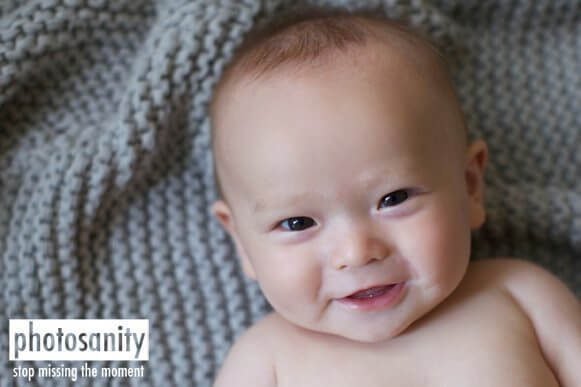 Jack at a similar age! This was more of a â€śposedâ€ť shoot, carefully timed to take place right after a nap and feeding so he would be in a good mood. With both kids, I found the afternoon to be a great time for photosâ€¦ especially as the light happened to be great in their room at that time as well. Your baby may be different but pay attention to whether there is a pattern of when they are the happiest. Also, unlike a professional photographer, as a parent you have the luxury of abandoning the shoot if your baby turns out to be in an uncooperative mood and trying again another day or at another time. 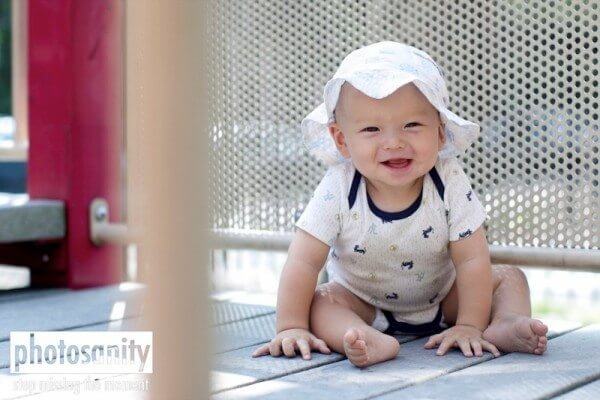 One thing I found with Jack is that his older brother Liam was great at making himÂ smile, just by being around, which was really pretty awesome (and also worked vice versa). In this photo, Liam was just off to the side and I got some great shots of them playing together as well. 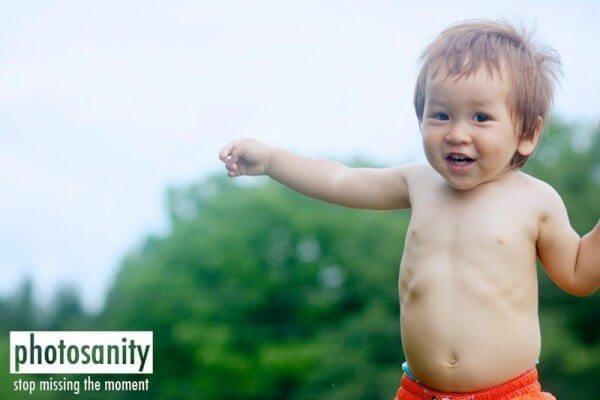 Liam at around 18 months. I remember this moment so clearly. We were upstate at a friend’s pool party and he was having a blast running back and forth in the backyard. An activity that involves repeated motion like that can be a lot of fun for little kids, creating natural smiles and multiple opportunities for capturing them. 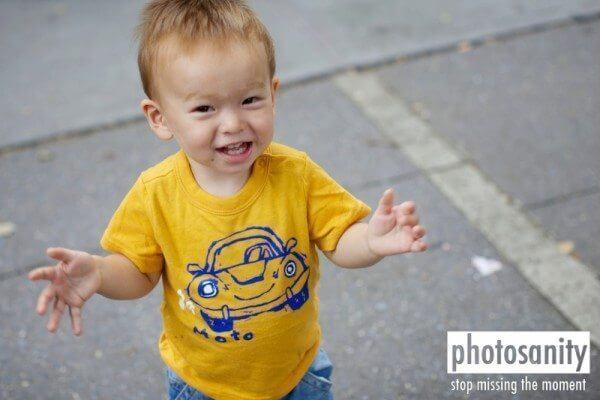 Jack at around 18 months, too. This is such a happy age, great for natural smiles and before the tantrums and angst of 2 and 3 years old! We were on the way home from the playground and Jack suddenly started singing and clapping in the middle of the street, so naturally I grabbed my camera. 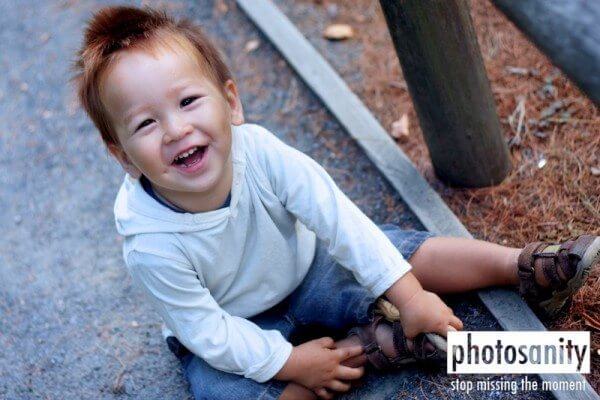 Kids become camera aware at a very early age these days, but because I photograph my kids so much and almost never ask them to pose, to this day they generally just ignore me. One key to capturing a natural smile is patience.Â If you wait long enough, your child will more than likely look up and smile at you, especially if you are interacting with them naturally, as I was when I captured this moment on the side of a path at the Brooklyn Botanic Gardens. 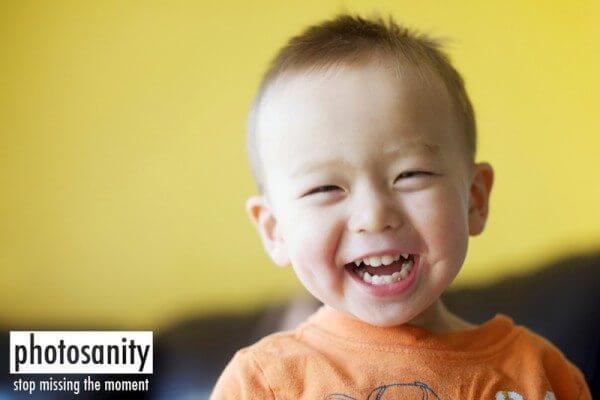 Jack on his second birthday. He actually started out with a fake posed smile and then loosened up when I started to tickle him under the chin. 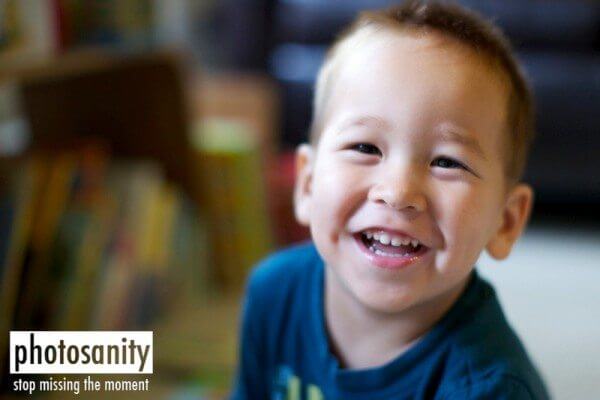 Liam, 2.5 years. Look at that smile! Again, to this day I really don’t do anything except to get myself situated in good light, check my settings, do a scan for background clutter, take some test shots and then wait for the smile. The smile isn’t really the goal either, but if it happens, I am ready. As they get older, jokes and silly songs can help a smile along if need be. 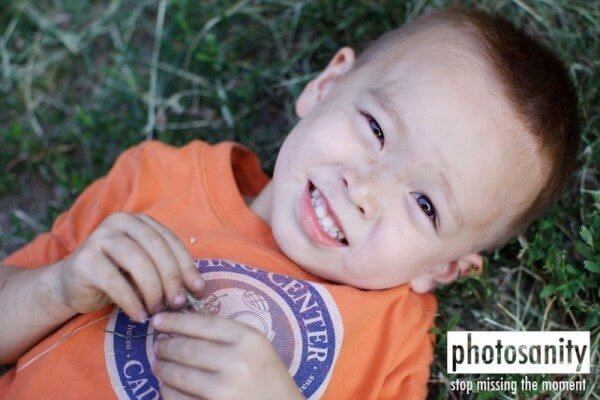 Jack, 3.5 years, just a few weeks ago. He was rolling around in the grass with Liam and a friend and I was ready to capture the moment when he looked up at me. 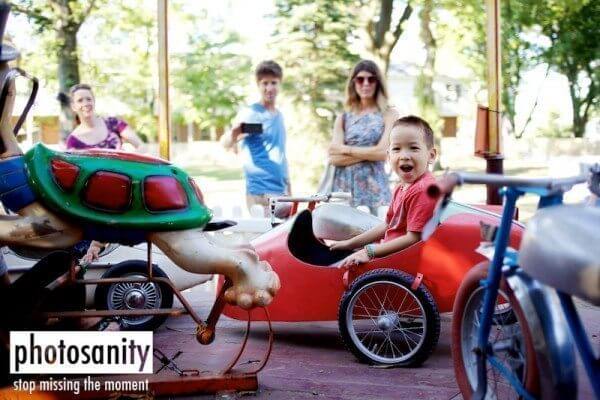 Last day before pre-K! Liam was 4.5 and who wouldnâ€™t smile riding a race car on a carousel?! 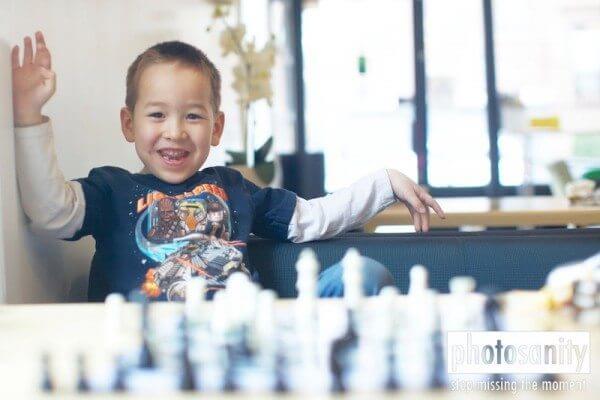 Liam, 5 years old, â€śbeatingâ€ť me at chess. Yes, he was pretty triumphant. 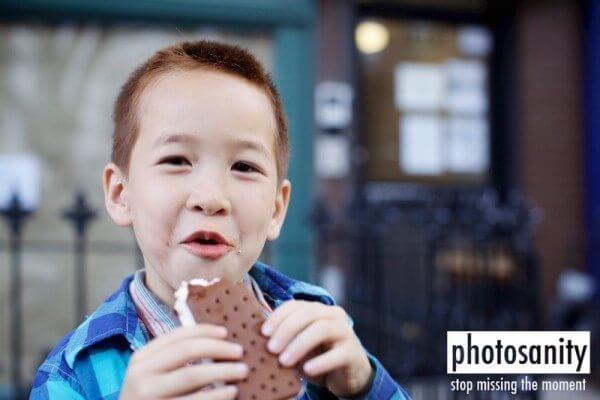 Looking through these photos was a great trip down memory lane for me. Remember though, donâ€™t just focus on capturing smiles as you will want to remember many aspects of your childâ€™s personality. But certainly there is nothing quite like a photo of a child smiling. May your photo collection be filled with many of them! 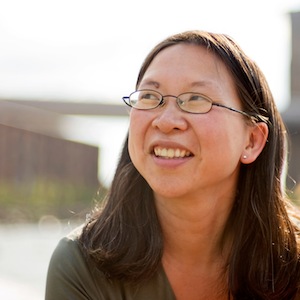