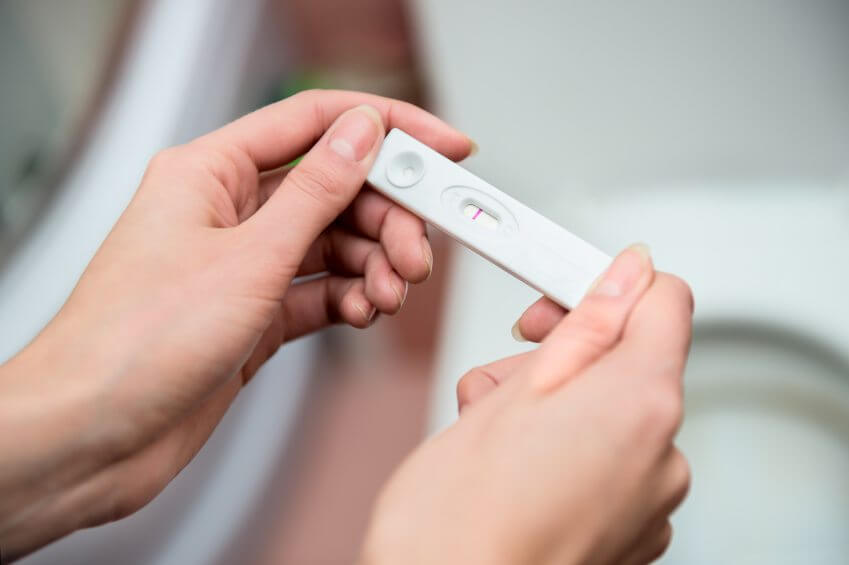 A new kind of pregnancy test is now available in American drugstores. Clearblue Advanced Pregnancy Test with Weeks Estimator can not only confirm your pregnancy suspicions, but it also reads the levels of the pregnancy hormone hCG in your urine to predict how many weeks along you are. This could be seen as a good thingâ€¦ unless your hCG levels arenâ€™t lining up with your own estimate of just how pregnant you are. Then begins the compulsive Google searches for â€ślow hCGâ€ť and â€śearly pregnancy embryo development.â€ť The results might lead you to believe youâ€™re going to miscarry. So is access to this information really such a good thing for expectant moms?

Iâ€™m currently pregnant for the third time. Last fall, I underwent one dose of fertility drugs and an artificial insemination treatment (IUI) to conceive for the second time in my life. From the moment we got a positive pregnancy test, we were bombarded with doctorsâ€™ demands that I submit to blood tests every two days to insure that my hCG levels were doubling. Guess what? They werenâ€™t. They were almost, 90% there, but apparently that doesnâ€™t cut it. In the world of modern medicine, doctors seem to want as much information as they can possibly gather via incessant test–even if there is no action to be taken on that information other than to incite possibly unnecessary worry in their patients.

As the weeks went on, I finally began refusing the tests, and some of the frequent ultrasounds, despite the doctorsâ€™ nagging, and you know what? It didnâ€™t matter. When I did miscarry, at 10 weeks, it was after I had been released by the fertility doctor into the care of my regular OB. The irony is that I had a missed miscarriage; itâ€™s estimated that I lost the baby just a couple of days after the last appointment with my fertility doctor, who had heard a strong heartbeat and seemed confident in the pregnancyâ€™s future.

I spent the two weeks after that appointment in pregnancy bliss, finally feeling free of some of the fear of miscarriage worry Iâ€™d been shouldering from the moment we â€śfailedâ€ť our first hCG test. But when I arrived for my first OB appointment, believing myself to be 10 weeks along, I learned those carefree weeks had been filled with false hope; the baby had passed without any sign to me.

Maybe the constant â€śmiscarriage watchâ€ť that my fertility doctors had conducted prepared me some for the loss. Maybe it was better to understand that the risk of miscarriage was a real thing; after all, approximately 25 percent of pregnancies end in the first trimester. But many women already worry about the risk of miscarrying, so why feed the animal with an OTC pee stick?

To be clear, Clearblue is not marketing their new pregnancy test as a miscarriage predictor. Olivia Kupfer, a spokesperson for the company, clarified this in an email statement. â€śThe Clearblue Advanced Pregnancy Test with Weeks Estimator was designed to not only tell a woman if she is pregnant or not, but also to estimate the number of weeks if she receives a positive result. It is not meant to predict or monitor miscarriage. The test was not studied for this use and is not recommended for this use. If a woman is concerned about her pregnancy, she should always consult her doctor or healthcare provider immediately.â€ť

But for the anxious-to-get-and-stay-pregnant mama, it could be hard to see it in any other way.