Home Â» Parenting Â» Breastfeeding Â» Would You, Could You, In a Lactation Pod?

Would You, Could You, In a Lactation Pod? 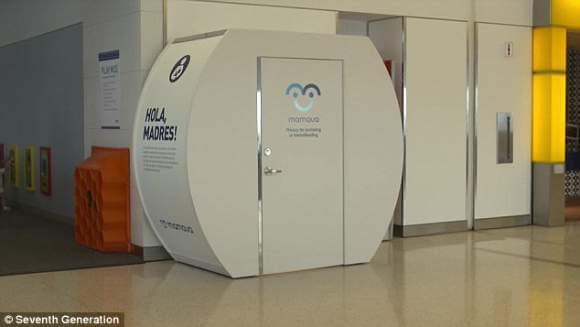 August is National Breastfeeding Month, perfect timing for the city of New York unveil five “lactation pods” theyâ€™ve developed. While I think they are a good idea, I feel like there are a few funny things about these pods!

The lactation pods are portable rooms designed to provide nursing moms with a private, comfortable place to breastfeed and pump. They have comfy benches, an electrical outlet, and a table in a room that can be locked, according to NY1. Â AÂ city councilman who watched his wife struggle with breastfeeding in public came up with the idea. Kudos to him for taking note, but Iâ€™m not sure heâ€™s come up with the best solution.

One weird thing is the locations of the pods. They opened the first at, drum roll, the Brooklyn Childrenâ€™s Museum. The Bronx Zoo, the Staten Island Childrenâ€™s Museum, and two hospitals are the other picks for pod placement. Look I know parents can be judgy of each other. But it doesnâ€™t seem like places that are geared toward families and children are the spots where moms feel the most uncomfortable breastfeeding. And this is a city with literally millions of public places and plenty of challenging breastfeeding locations. Try across the street from a construction site, a public library, or a busy train station with no seating. Those are hard places to breastfeed if youâ€™re concerned about being leered at, or dealing with a fussy baby, or need to sit to nurse. (I believe some pods previously opened at NYC airports, like the one pictured).

Also ranking in the weirdness is the name lactation pods. According to the NY1 story, a goal of the pods is to encourage and promote breastfeeding in communities with low rates of doing so. â€śBreastfeeding is welcome hereâ€ť and â€śprivacy for breastfeeding and pumpingâ€ť is printed on the pod, in English and other languages including Arabic. I donâ€™t think the room actually says â€ślactation podâ€ť on it anywhere, thank goodness. It sounds like some kind of space age milk bar! I wonder how it translates….

Admittedly Iâ€™m not the demographic they are trying to reach. I live in a neighborhood where breastfeeding in public is the norm and totally encouraged. A mom in my area is much more likely to be judged/shunned/lectured/stared down for feeding formula to a baby than for breastfeeding!

That environment of extreme breastfeeding support is surely shaping my next opinion: shouldn’t we be promoting breastfeeding as something that is fine and normal to do out in the open, instead of hidden away in a tiny room? The rooms are great for pumping, for sure. And a comfy chair is always nice for nursing. But moms should be told it’s OK to feed their babies wherever and whenever they need.Â

Maybe NYC could provide nursing moms with breastfeeding cover-ups and information about their breastfeeding rights. Itâ€™s a city where privacy is hard to come by. Â And with just five pods for a city of eight million, it’s unlikely these rooms are going to have much of an impact. But what if every hospital provided new moms with portable breastfeeding privacy in the form of a nursing cover? And briefed moms on their right to nurse in public? That seems like it could get somewhere.

What’s your take on the lactation pods? Would you like to see them in your city?