Why Fitness Matters As a Grandparent | Mom365 Blog

Home Â» Parenting Â» Why Fitness Matters As a Grandparent

Why Fitness Matters As a Grandparent 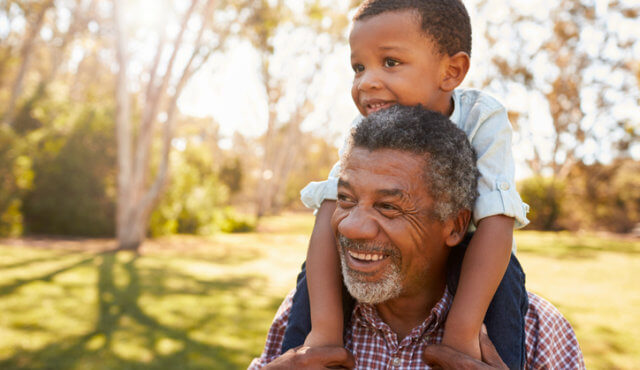 New parents may be among the most overworked people of all, so it’s easy to see why they rarely hesitate to rely on close family members to help out when they can. Being a grandparent can bring just as much joy as for the previous generation and is arguably even more fun (grandparents often take on the active roles in a child’s life that parents don’t always have time for).

“There are now more grandparents in the world than ever before.”

There’s no doubt that grandparents are an important component of most young families, but their exact roles might not always be so well-defined. To help new parents be all they can be, grandparents should look to establish their most ideal place in the family early in a child’s life, do what they can to enrich it and enable parents to do the same.

What’s striking about being a grandparent today is just how common it actually is – more common than any previous point in history. According to data from the U.S. Census Bureau, as of 2014, more than 69 million Americans considered themselves grandparents, 24 percent more than in 2001. This marks the beginning of a major social change happening throughout the world. The Census Bureau estimates that by 2050, there may well be more grandparents than children in the U.S. and many other developed nations.

That should leave a much bigger network of family members available to help with the myriad tasks involved in raising children. Ironically, one of the most helpful ways grandparents can help their growing family might depend on helping themselves. Grandparents can’t be expected to take on very many child-rearing duties without being in good health, something that grows increasingly harder to maintain as we age.

Fortunately, not all is lost for most grandparents or even older parents who want to be around for as much of a child’s life as possible but worry about being late arrivals to the health and fitness party. A study published this year based on experiments conducted by the Mayo Clinic of Rochester, Minnesota, found surprising, potentially life-extendingÂ health benefits from exercise in older adults.

According to the study and based on previous research in mice, older people appeared to benefit more than younger participants from a carefully monitored 12-week regimen of high intensity exercise. Those benefits were seen at the genetic level – researchers found that in those participants older than 64, more than 400 observable genetic changes could be detected, some of which could theoretically improve their lifespan and overall health.

The participants in this study were closely monitored and given precise instructions on how to exercise for 12 weeks, something that’s certainly not feasible for everyone. Still, more scientific research has found that just about any kind of exercise can be beneficial for just about everyone, and even lead to a longer life. Another recent study based on millions of pieces of data found that on average, each hour of running could add around seven hours to a person’s life expectancy. Even less strenuous activity like walking on a regular basis could reduce a person’s risk of premature death by 12 percent, according to the same study.

More grandparents living longer, healthier lives is great news for all of us. Grandparents often lend a hand to new parents simply by being there – for advice, to help out with a project or watching the baby for a night. Besides looking to live their best lives, grandparents can help out their adult children as well as the newest members of the family by simply keeping up the great work they’ve already done.

Andrew Morrell is a writer based in Chicago. He enjoys reading and writing about a wide variety of topics, from health to financial planning. Otherwise, he’s into fun things too, like fostering kittens and exploring the city.